DID YOU KNOW? ... 40% of heat loss is due to air leakage, per the Department of Energy?

DID YOU KNOW? ... An 1/8-inch air gap along the opening of a pair of 7-foot doors is equivalent to leaving a window half open during the coldest night of the winter or the hottest day of the summer?

DID YOU KNOW? ... A 1/2 inch round hole can carry as much as 50 cups of water through it over a course of a year? Increased moisture can lead to increased mold, bacteria and other health related problems. 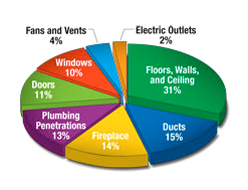 Ice Dams:
An Ice Dam is a common problem that can result in water damage to the exterior or interior of a home. The cause of ice dams is usually warm air leaking from the living area that finds its way into the attic and roof line. The warm air from within the house melts the snow on the roof above where the air leak is located. This melting snow refreezes again once the water moves away from the warm area on the roof. If temperatures during the daytime stay below freezing long enough, the ice will begin to build up and allow water to seep underneath the shingles. As a result, there will be water damage to the interior walls and ceilings.

Ice Dam Photos:
The photos below show an ice build-up on a roof that was caused by a hole a plumber created to access pipes hidden in the wall. The hole allows warm air from the living space to seep into the attic and roof line. The infrared photos indicate the heat loss. Also, our investigation revealed a major heat loss problem that was found throughout the house. This problem was a result of improperly sealed seams that were located is some hidden areas of the drywall. The homeowner resolved both the heat loss and ice dam issues by sealing the hole and drywall seams throughout the home. 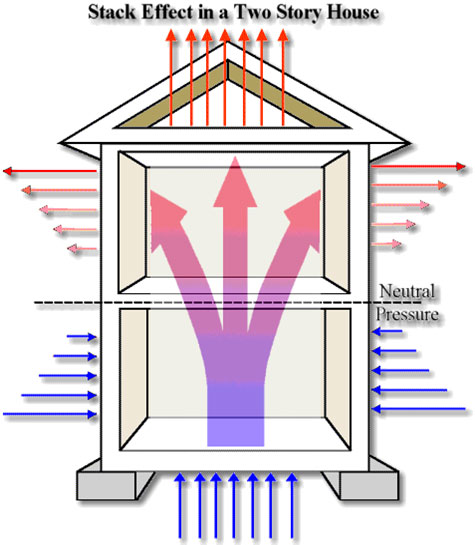 The movement of air in and out of structures, homes, buildings, chimneys, etc., is referred to as the "stack effect." This effect, also known as "the chimney effect," is driven by buoyancy. Temperature and moisture differentials create a difference in indoor-to-outdoor air density, and result in a positive or negative buoyancy force. The greater the thermal difference and the height of the structure, the greater the buoyancy force, and this creates the stack effect.

The stack effect causes air infiltration in poorly sealed structures, homes, and buildings. During the heating season, the warmer indoor air rises up through the building and escapes at the top either through open windows, ventilation openings, or through leakage. The rising warm air reduces the pressure in the base of the building, forcing cold air to infiltrate through either open doors, windows, or other openings and leakage. During the cooling season, the stack effect is reversed, but is typically weaker due to lower temperature differences.

Air will leak through a building envelope that is not well sealed. This leakage of air decreases the comfort of a residence by allowing moisture, cold drafts, and unwanted noise to enter and may lower indoor air quality by allowing in dust and airborne pollutants. In addition, air leakage accounts for between 25 percent and 40 percent of the energy used for heating and cooling in a typical residence.

The amount of air leakage in a house depends on two factors. The first is the number and size of air leakage paths through the building envelope. As shown in the figure (below), these paths include joints between building materials, gaps around doors and windows, and penetration for piping, wiring and ducts. The second factor is the difference in air pressure between the inside and outside. Pressure differences are caused by wind, indoor and outdoor temperature differences (stack effect), chimney and flue exhaust fans, equipment with exhaust fans (dryers, central vacuums) and ventilation fans (bath, kitchen).

Air sealing the building envelope is one of the most critical features of an energy efficient home. To prevent air leakage, it is best to seal the building envelope during construction prior to installation of the drywall. Once covered, many air leakage paths will be more difficult and costly to access and properly seal. A "blower door" test (typically included with a Home Energy Rating) is a good way to identify air leakage paths so that they can be sealed using an appropriate material. 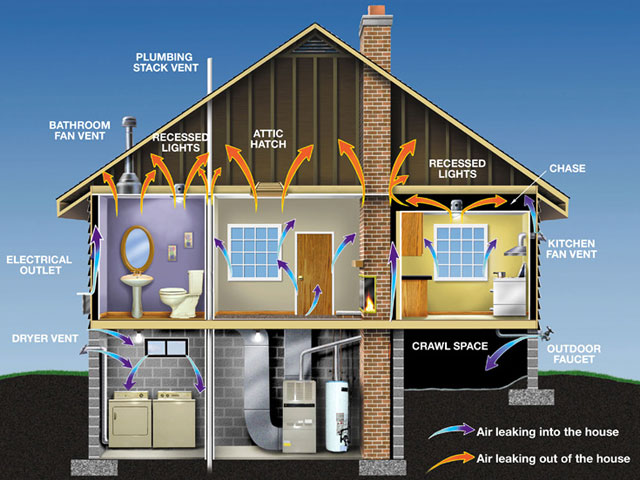 Benefits of Air Sealing Your Home or Business

Air Sealing the building envelope can provide many benefits including: